Let’s continue on the journey of boundaries for a while, and let me get a little more into detail about the three ways of learning boundaries that I wrote about in my last post. This post, like the subject line says, is all about – dogs, and what we can learn from them about boundaries. 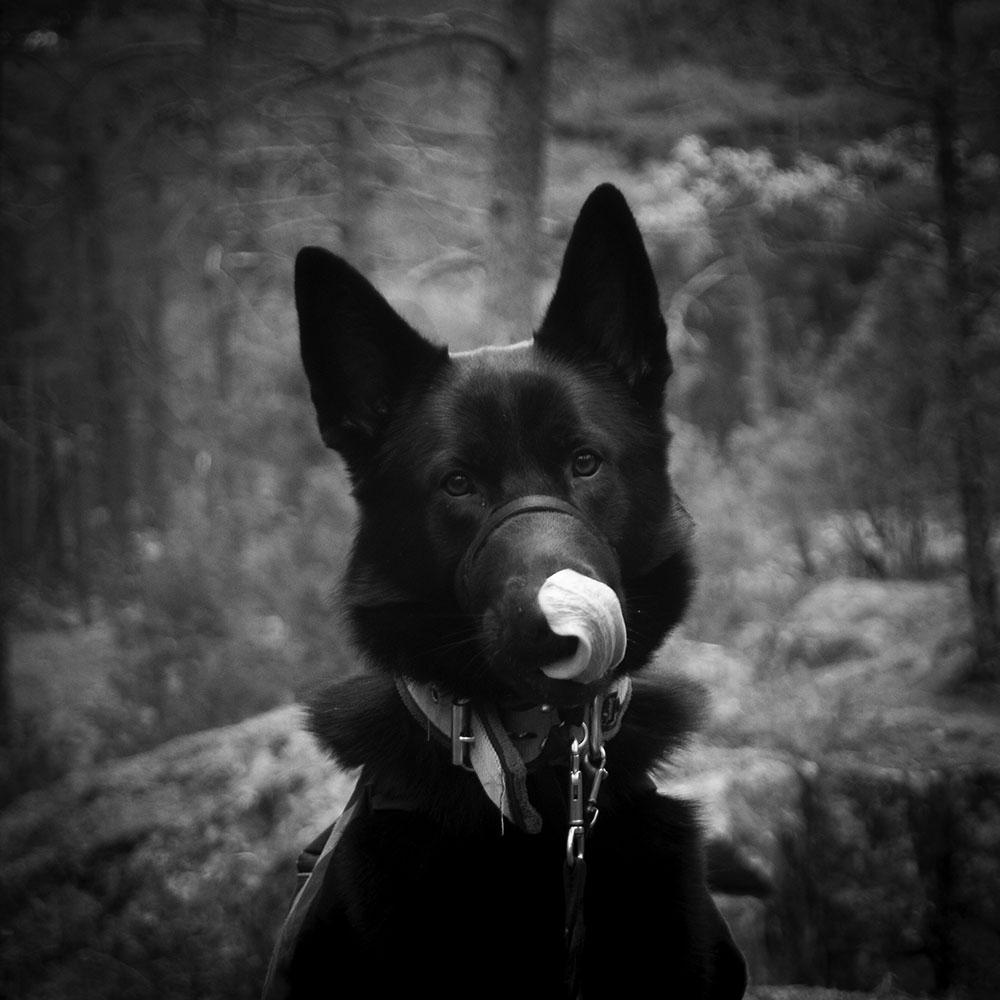 This is my present dog, Boyo – another German shepherd.

I was lucky to get exactly the dog I needed when I decided to foster a pup from the Swedish defense dog breeding programme. Her name was Ella, she was tiny and was small for a German shepherd female even as an adult. I remember the day I picked her up as if it was yesterday, and the pure happiness I felt when she was sleeping in my arms on the way home in the car. I don’t think I have ever been as happy as I was just then.

Now, I’ll never recommend anyone to get a dog like that if you don’t work in the police, the military or similar. Ella was bred from hardcore working lines to suit military work, which means she had energy levels beyond the sky, a drive to match, a psyche strong as diamonds, and a personality to match. She was horrible to live with, especially since I most of our time together was in very bad shape.

It was challenging to deal with a dog whose energy never stopped. She never got tired. She always slept with one eye open, and I’m not exaggerating. She was pushy, intense, extremely energetic, she loved everyone, and she absolutely loved to live life.

And that’s the point, actually. I bet lots of people would consider me soft, and when I was younger I’m sure I was. To my disadvantage, I might add. There are limits to how soft one can be before it starts hurting you instead of serving you. Sharing my life with Ella, I had to learn how to harden myself, to find my core and becoming unshakeable. Because if I didn’t, I would end up with a dog who’d be a monster. And trust me, there were times when people were worried.

Now, Ella was an extreme case. My present dog, Boyo, is a German shepherd as well. He’ll be two years old in December, but compared to Ella he’s like melted chocolate. Yet, compared to some other dogs we’ve met, he’s probably percieved as quite overwhelming.

However; if you want to get a dog to learn about boundaries I suggest you get one who’s a bit more strongminded than the average companion dog. No need to get the worst of the worst, but find something else than any of the softer breeds there are. Allow yourself to push beyond your comfort zone, so you actually learn. I’ll do that (again) next time I’m getting a new dog.

If you’re new to the idea of getting a dog, I recommend you do your research before pursuing your future pup. Regardless your goal with your dog (learning boundaries, for example), it is also quite a responsibility. Once you have your puppy, you’re responsible for making your pup a great dog. My personal goal is and have always been for my dog to be balanced (quite an accomplishment for someone who’s never been balanced), rather than welltrained.

Since dogs are not human, they don’t function the way we do. A dog doesn’t care who you are or what happened to you yesterday. They are interested in how you’re doing right now, this instant. There’s no point in lying to them, because they can see right through you. A dog is an animal, and as such, they communicate through energy, space and body language more than anything else.

You can of course train your dog to understand commands et cetera, but in my humble opinion it’s only fair that we learn how to communicate through dog language as well. And by that, I don’t mean we should learn how to wag our non-existent tails, but rather how to visualize and use our own energy, how to hold our bodies et cetera. Trust me, all these things will help in most other areas of your life as well.

If you’re like me, having a hard time finding balance, this too is something you’ll have to work even harder on. A dog is the best barometer of your emotional state you can find, and they’ll act and react instantly on any emotional changes. If you want your dog to be balanced, you need to be balanced as well. This is something I’ve had to work extremely hard on, especially with Ella. Lately, yoga has done wonders for my own balance and stability, which is really, really awesome.

The benefits of having at least one dog in your life are many, aside from the fact that you have to walk them several times a day which means you get to go outside too. Personally, I’m a bit nerdy when it comes to dogs, their communication and behaviour, but you don’t really need all that to take good care of a dog. It helps, though – or at least I think so. And it does give purpose and meaning to life, caring for another being. I don’t have any children, so I wouldn’t know about that – dogs and cats are more than enough for me. ♥

Letting dogs into my life is by far one of the best things I’ve ever done for myself. I can’t imagine living without dogs for any longer periods of time (the eight months between Ella and Boyo was way too long) again. I am hoping that I can overlap two dogs with at least couple of years, so there’ll never be any empty spaces in time again.

I realize I may repeat myself, but expanding your mind and soul by having an animal as your teacher is – amazing. If you’re lucky, like I was with Ella – and the only cat I have left now, Molly, you’ll end up with not only an emotional bond, but also a spiritual bond. Both of them has been and is quite communicative, sending clear messages right into my heart, when necessary. Boyo, my present dog, hasn’t shown any signs of this – yet. But he’s only (almost) two years old, so that may come later with him.

To end this long post, I’ll also tell you that having a dog is a lot of hard work. In the end, it’s totally worth it. But I won’t deny that there’s a lot of work to be done in raising a pup into the becoming of an amazing dog.